Today, I’m focusing on Ripple and a project that is very similar in nature (and was started by former Ripple executives): Stellar Lumens (XLM). They’re both somewhat similar in what they are building solutions for and, as I see it, are taking initiatives that could potentially compete with each other – which is not something I think you can happens to any degree with Ripple and Bitcoin or Ripple and Ethereum.

The approach which I described in the last post, saying that investing in projects that are the best in their respective spaces does not apply so much to XRP and XLM.

So which one should you invest in?

Should you invest in Ripple (XRP) or Stellar Lumens (XLM)?

…but I’m not going to change my opinion greatly. If you had to choose between XRP and XLM, I’d still say invest in both – but invest in XRP first. And this is because of the target markets of the projects. XRP’s is mainly B2B, while XLM is retail, which I think it will have a tougher time breaking into, given the heavy competition in the space and the fact that it is the retail market. This is not damning, but a concern for long term investments. More on this later.

What I’m saying is, if you’re in it for the long run, you’re most likely going to be a little more tentative about XLMs prospects. I could be wrong, and Stellar is making some big moves (See IBM and other initiatives), but if you want are the kind of person who is hesitant because of how quickly money can be lost in investing in cryptocurrencies, then you’re probably going to feel that way.

There are a few differences between the two projects and tokens, and the both of them are targeting banks/enterprises (while also having to deal with these entities themselves coming up with their own solutions), with XLM focused more on people to people transactions than XRP. I’ve detailed these technical and ecosystem differences in the next section, as well as the success the two projects have had so far.

If you were to ask me which of the two I – just my opinion here – would invest in FIRST, it would XRP/Ripple. I’m a little hesitant to say something like “only of these two will survive” because I think such statements are too bold to be made so early and projects have a tendency to change track as time progresses. There is definitely room for both.

But, if you see these DLTs as disrupting this specific industry, and would like to invest in the project with the most potential to do it, then XRP seems like the safer bet.

The Key Differences between XRP and XLM 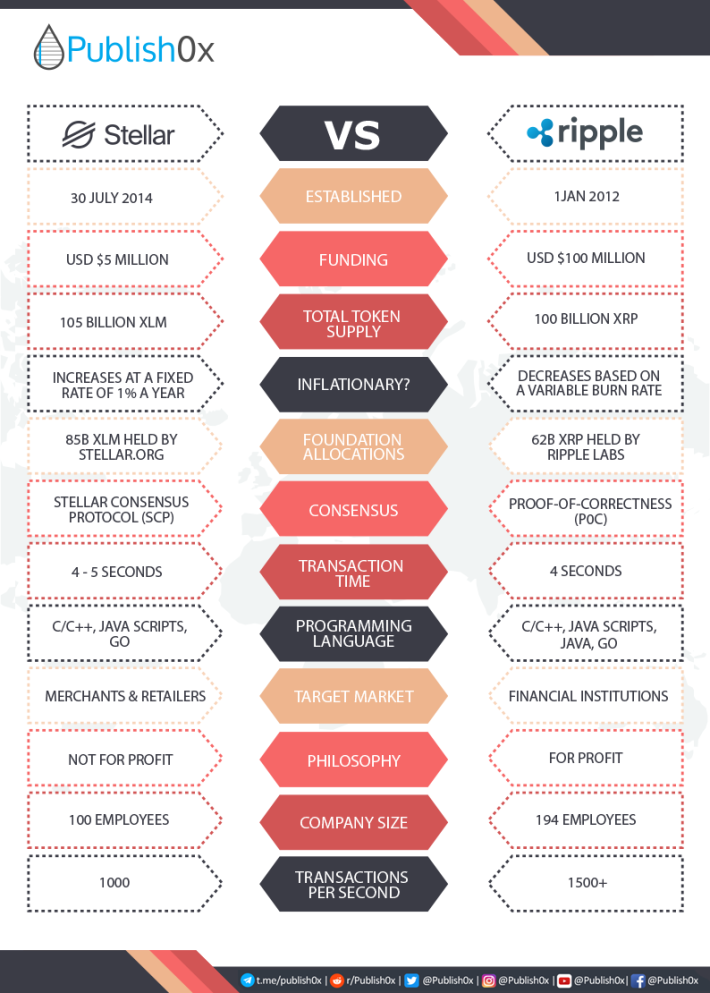 Let’s start with the technical stuff. Both Ripple and Stellar also have a pre-mined total supply of 100 billion XRP tokens and XLM tokens. While no more than 100 billion XRP tokens will ever be produced, Stellar plans to go beyond the initial 100 billion XLM tokens by producing new tokens at the rate of 1 percent per year. XLM’s total supply now stands somewhere around 105 billion. Ripple’s token economy is deflationary and they have said that they will burn transaction fees.

In terms of technical differences, both Ripple and Stellar network uses a sort of Federated Byzatine Agreement to achieve consensus, but there are some differences. Ripple uses ‘Proof-of-Correctness’, which applies consensus algorithm to the ledger every few seconds. Once nodes agree, the ledger is closed.

Stellar uses the Federated Byzatine Agreement as well, and you could say that it refined the consensus protocol that was started by Ripple. It is claimed to have higher fault tolerance and offer greater decentralization (the degree of centralization in Ripple has been a thorn in its side, from an investor’s perspective.) Officially called the Stellar Consensus Protocol, it differs from Ripple in that it is more open to accepting new nodes, among other technical details.

One key difference worth noting is that the Stellar Development Foundation is a non-profit, while Ripple is for profit entity.

But now we come to the key difference between the two projects: their target markets. As it is very well known, with news of a new financial institution joining Ripple’s network seeming to arrive almost every other day, Ripple is strongly focused on convincing banks that it’s network is the way to go for international transactions, having demonstrated that transactions are cheaper and faster by many orders of magnitude.

But even with XLM having a slightly more consumer-oriented focus, it is still keen on working closely with banks and, indeed, has done so already, having partnered with IBM to help banks launch their own stablecoins. This IBM World Wire, based on the Stellar Network, is arguably Stellar’s biggest breakthrough, and focuses on cross-border payments and settlements. Wirex is also launching 26 stablecoins on the Stellar Network.

Other initiatives include collaborations with several notable entities, including professional services firm Deloitte, which has integrated with Stellar to the end of building a cross-border payments application called Deloitte Digital Bank. It is also interesting to note that Stellar is backed by Visa, Citi Ventures, Nasdaq and, of course, payments company Stripe.

I feel that there is no need for me to sell Ripple’s efforts in expanding its ecosystem; it’s drawing of over 200 banks and financial institutions into its much hyped RippleNet. This is clearly one of Ripple’s strongest qualities – the fact that it has managed to convince entities from all across the world to test its technology. Not only has it managed to do this, while also convincing notable financial industry insiders that Ripple’s network may be “Swift 2.0”, it has also lived up to its marketing by way of receiving much praise from these entities who have tried many cross-border pilot programs successfully. 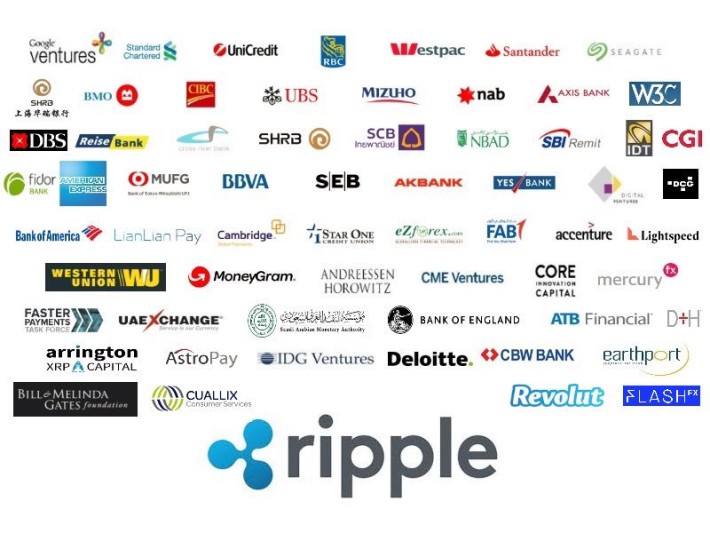 Some of these differences are just broad strokes with respect to what Ripple and Stellar are, and what they are currently setting out to achieve. It does not speak entirely to the point of whether or not you should invest in one token or the other. However, knowing the agenda of these projects, and how they are currently laying the foundation for a decentralized future in finance and commerce, gives a would-be investor a good gauge on their investment potential.

What conclusions can you draw from this? Well, mostly, that while they are very similar, they are different enough to warrant their own consideration for investment.

However, what are the prospects of each project and their investment potentials? Quite clear cut, with Ripple I think (something I’ve talked about a lot before) but not as clear with Stellar Lumens. In the end, you will have to see if Stellar is making progress in its own ecosystem well and whether the stellar development team (we are talking about former Ripple executives after all; also, excuse the pun) can continue to develop the products and services that will keep it competitive as an asset in the near future.

That’s my two cents. The real task will be to see how development, adoption and accessibility pan out in the years to come. While it is fairly solid in this regard, that goes for Ripple too.